HOW TO SOLVE TRIGONOMETRY WORD PROBLEMS

The following steps will be useful to solve word problems in trigonometry.

Understanding the question and drawing the appropriate diagram are the two most important things to be done in solving word problems in trigonometry.

Once we understand the given information clearly and correct diagram is drawn, solving word problems in trigonometry would not be a challenging work.

After having drawn the appropriate diagram based on the given information, we have to give name for each position of the diagram using English alphabets (it is clearly shown in the word problem given below). Giving name for the positions would be easier for us to identify the parts  of the diagram.

Now we have to use one of the three trigonometric ratios (sin, cos and tan) to find the unknown side or angle.

Once the diagram is drawn and we have translated the English Statement (information) given in the question as mathematical equation using trigonometric ratios correctly, 90% of the work will be over. The remaining 10% is just getting the answer. That is solving for the unknown.

These are the steps most commonly involved in  solving trigonometry word problems.

Things to be Known to Solve Trigonometry Word Problems

To know, how to solve trigonometry word problems, we have to know the following basic things in trigonometry.

Angle of Elevation and Angle of Depression 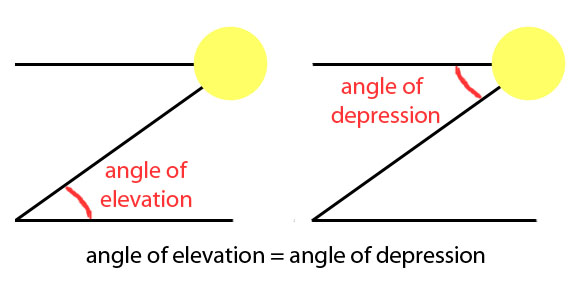 Let us go through and understand the given information. From our understanding of the information given, we can draw the below picture. 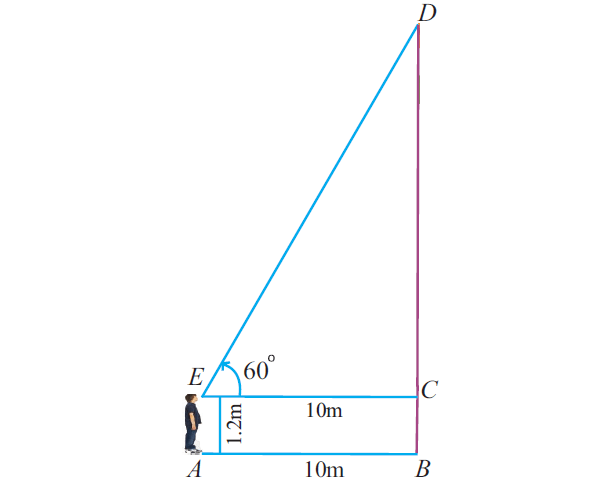 In the picture drawn above, we have to give name for each position using English alphabets.

Point on the pole corresponding to eye level ---> C

Now, from the above figure, clearly height of the pole is BD.

In the picture above, we have

Now, our aim is to get the length of CD.

In the right angle triangle CDE, clearly CD is opposite side and EC is adjacent side and it is known to be 10m.

In the right angle triangle CDE, we have to find the length of opposite side (CD) and the known side is adjacent side (EC  =  10m).

We can use the trigonometric ratio "tan" in this problem. Because, only in "tan", we have opposite side and adjacent side. Now, lets look at, how to find the length of CD.

Would you like to practice more word problems in Trigonometry ?