HOW TO FIND MODE OF UNGROUPED DATA

For an individual data mode is the value of the variable which occurs most frequently.

In this example, three values 20, 21, 22 occur two times each. There are three modes for the given data!

∙ A distribution having only one mode is called unimodal.

∙ A distribution having two modes is called bimodal.

∙ A distribution having Three modes is called trimodal.

∙ A distribution having more than three modes is called multimodal.

Following are the margin of victory in the foot ball matches of a league. 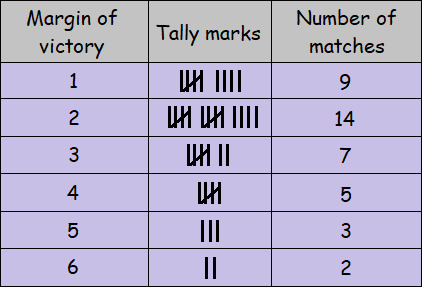 Since 2 has occurred more number of times (14 times), the mode of the given data is 2.

The number of children in 20 families are

Since 2 has occurred more number of times (15 times), the mode of the given data is 2.

In a ungrouped frequency distribution, the value of the item having maximum frequency is taken as the mode.

6 has the maximum frequency 9.

The demand of track suit of different sizes as obtained by a survey is given below :

Which size is in greater demanded?