HOW TO FACTOR TRINOMIALS WITH 2 DIFFERENT VARIABLES

Grouping means factoring out the common stuff found in all the given terms.

Factoring polynomials can be done by the following methods

(i) Factoring by grouping.

We can group the terms in the above expression as shown below.

We find 4 in common the terms of the first group. So, 4 can be factored out.

We find 5x in common the terms of the second group. So,  5x can be factored out.

Factor out the common stuff. 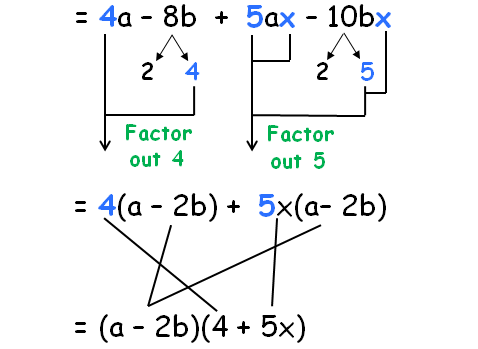 In the given expression, we a2 in common. So, a2 can be factored out.

We find 5x3 in common in the given terms. So, 5x3 can be factored out.