HOW TO DETERMINE IN WHICH QUADRANT AN ANGLE LIES

An angle is said to be in standard position if its vertex is at the origin and its initial side is along the positive x-axis.

Similarly, we can define for the other three quadrants. Angles in standard position having their terminal sides along the x-axis or y-axis are called quadrantal angles. 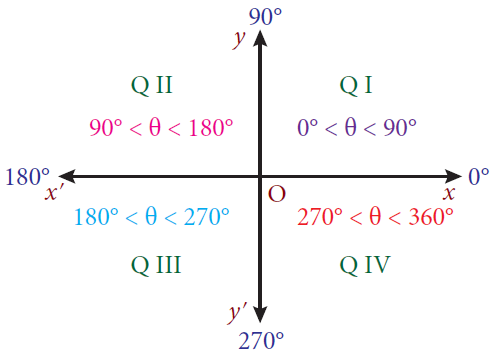 By continuing the counter clockwise rotation, angles larger than 360◦ can be produced.

If we rotate in clockwise direction, negative angles are produced.

Identify the quadrant in which each of the following  angles lies.

Since it is negative angle, we have to do counter clock rotation.

Since it is negative angle, we have to do counter clockwise rotation.