How to Construct a Triangle When Two Angles and One Side is Given :

The way of constructing a triangle is depending on the information given.

Here we are going to see, how to construct a triangle when two angles and one side is given.

To construct a triangle when two angles and one side is given, we must need the following mathematical instruments.

Using protractor, at X, draw a ray XP making an angle of 30° with XY.

Using protractor, at Y, draw another ray YQ making an angle of 100° with XY. The rays XP and YQ intersect at Z.

Now, XYZ is the required triangle. 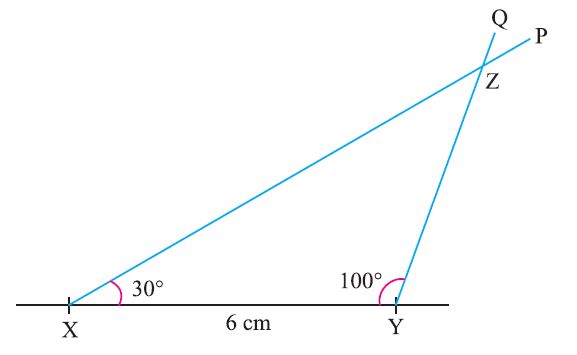 This construction clearly shows how to construct a triangle with the mathematical instruments ruler and protractor when two angles and one side are given.

If lengths of all the three sides are given, can always we construct a triangle ?

Let us get answer for the above question with an example.

A student attempted to draw a triangle with given measurements PQ = 2 cm, QR = 6 cm, PR = 3 cm. First he drew QR = 6cm. Then he drew an arc of 2cm with Q as centre and he drew another arc of radius 3 cm with R as centre. They could not intersect each to get P.

What is the reason ?

With ‘R’ as centre, draw an arc of radius 3 cm above the line QR.

With ‘Q’ as center, draw an arc of c cm above the line QR

Let us apply the above steps and see whether the two arcs intersect. 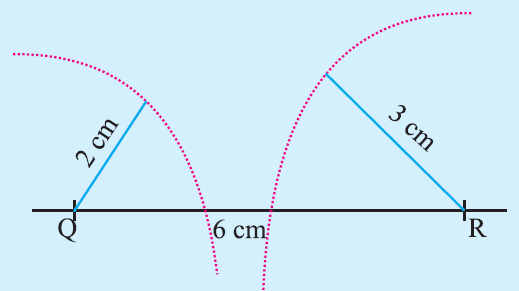 In the above figure, the two arcs said in step 2 and step 3 do not intersect.

Since the two arcs do not intersect, we can not draw a triangle with the given the three sides.

According to the property of triangles, we have that he sum of any two sides of a triangle is always greater than the third side.

After having gone through the stuff given above, we hope that the students would have understood how to construct a triangle when two angles and one side is given.