About "History of statistics"

Going through the history of ancient period and also that of medieval period, we do find the mention of statistics in many countries.

However, there remains a question mark about the origin of the word ‘statistics’. One view is that statistics is originated from the Latin word ‘ status’.

In those days, statistics was analogous to state or, to be more precise, the data that are collected and maintained for the welfare of the people belonging to the state.

We are thankful to Kautilya who had kept a record of births and deaths as well as some other precious records in his famous book ‘Arthashastra’ during Chandragupta’s reign in the fourth century B.C.

During the reign of Akbar in the sixteenth century A.D. We find statistical records on agriculture in Ain-i-Akbari written by Abu Fazl.

Referring to Egypt, the first census was conducted by the Pharaoh during 300 B.C. to 2000 B.C.

We may define statistics either in a singular sense or in a plural sense Statistics, when used as a plural noun, may be defined as data qualitative as well as quantitative, that are collected, usually with a view of having statistical analysis.

However, statistics, when used as a singular noun, may be defined, as the scientific method that is employed for collecting, analyzing and presenting data, leading finally to drawing statistical inferences about some important characteristics it means it is ‘science of counting’ or ‘science of averages’

Among various applications of statistics, let us confine our discussions in the following fields. 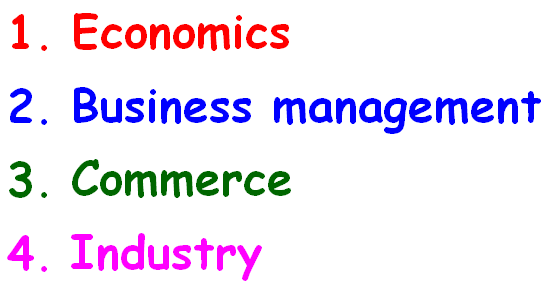 Now, let us discuss the application of statistics in the above fields in detail.

Modern developments in Economics have the roots in statistics. In fact, Economics and Statistics are closely associated.

Time Series Analysis , Index Numbers, Demand Analysis etc. are some overlapping areas of Economics and statistics. In this connection, we may also mention Econometrics – a branch of Economics that interact with statistics in a very positive way.

Conducting socio-economic surveys and analysing the data derived from it are made with the help of different statistical methods.

Regression analysis, one of the numerous applications of
statistics, plays a key role in Economics for making future projection of demand of goods, sales, prices, quantities etc. which are all ingredients of Economic planning.

Gone are the days when the managers used to make decisions on the basis of hunches, intuition or trials and errors.

Now a days, because of the never-ending complexity in the business and industry environment, most of the decision making processes rely upon different quantitative techniques which could be described as a combination of statistical methods and operations research techniques.

So far as statistics is concerned, inferences about the universe from the knowledge of a part of it, known as sample, plays an important role in the development of certain criteria.

Statistical decision theory is another component of statistics that focuses on the analysis of complicated business strategies with a list of alternatives – their merits as well as demerits.

In this age of cut-throat competition, like the modern managers, the industrialists and the businessmen are expanding their horizons of industries and businesses with the help of statistical procedures.

Data on previous sales, raw materials, wages and salaries, products of identical nature of other factories etc are collected, analysed and experts are consulted in order to maximise profits.

Measures of central tendency and dispersion, correlation and regression analysis, time series analysis, index numbers, sampling, statistical quality control are some of the statistical methods employed in commerce and industry.

Even though we have various applications of statistics, there are some limitations too.

Now, let us look at the limitations of statistics.

Before applying statistical methods, we must be aware of the following limitations :

1.  Statistics deals with the aggregates. An individual, to a statistician has no significance except the fact that it is a part of the aggregate.

3.  Future projections of sales, production, price and quantity etc. are possible under a specific set of conditions. If any of these conditions is violated, projections are likely to be inaccurate.

4.  The theory of statistical inferences is built upon random sampling. If the rules for random sampling are not strictly adhered to, the conclusion drawn on the basis of these unrepresentative samples would be erroneous. In other words, the experts should be consulted before deciding the sampling scheme.

After having gone through the stuff given above, we hope that the students would have understood "History of statistics".

Apart from the stuff given above, if you want to know more about "History of statistics", please click here

Apart from "History of statistics", if you need any other stuff in math, please use our google custom search here.