Find the angle of a sector whose radius is 21 cm and length of the arc is 66 cm.

The ratio of area of quadrant of the circle to the area of the semi circle is.

Find the area of the shaded portion if radius of the circle OA measures 7 cm and AB = DC = 7 cm. 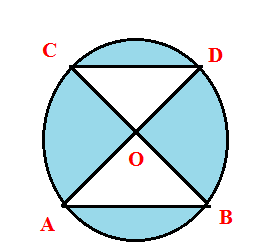