In this section, we will see some practice problems for 6th grade students.

A gardener plans to plant 570 trees in 19 rows. Each row is to contain the same number of trees. How many trees will there be in each row ?

Each row is containing same number of trees.

Hence 30 trees in each row.

The population of a town is 450772. 1 out of every 14 persons is reported to be educated. In all, how many educated persons are there in the town.

Hence the number of educated persons is 32198. 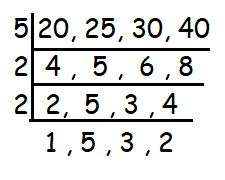 Given that LCM of two numbers is 16 and their product is 64, determine their HCF.

Number of boys : Number of girls

Find the third term of a proportion whose first, second and fourth terms are respectively 24, 8 and 5

Let x be the third term.

The sum of the interior angles of a triangle is 180°.

A tile is a square of side 25 cm. How many such tiles would be required to cover the floor of a square bath room of side is 3 m ?