We already know, how to evaluate probabilities by counting the number of favorable outcomes and dividing that number by the total number of possible outcomes.

In this section, we will use a related process in which the division involves geometric measures such as length or area. This process is called geometric probability.

In the diagram shown below, AB is a segment that contains the segment CD.

If a point K on AB is chosen at random, then the probability that it is on CD is as follows :

In the diagram shown below, J is a region that contains region M.

If a point K in J is chosen at random, then the probability that it is in region M is as follows :

Find the probability that a point chosen at random on RS is on TU.

The west side of town is approximately triangular.

The area of the rectangular region is

So, the probability that the assignment is on the west side of town is

So, the probability that the work assignment is on the west side is about 28%.

A dart is tossed and hits the dart board shown below. The dart is equally likely to land on any point on the dart board. Find the probability that the dart lands in the red region. 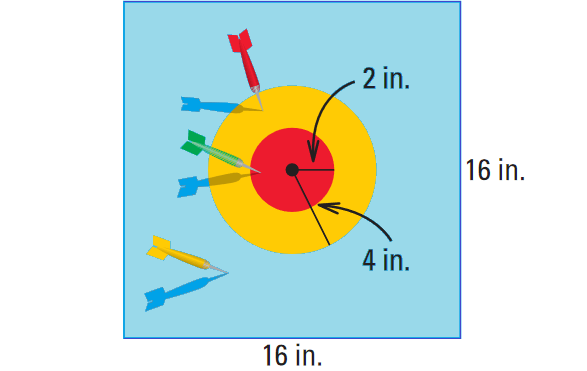 Using a Segment to Find a Geometric Probability

Mr. Jacob is visiting San Francisco and taking a trolley ride to a store on Market Street. He is supposed to meet a friend at the store at 3:00 P.M. The trolleys run every 10 minutes and the trip to the store is 8 minutes. Mr. Jacob arrives at the trolley stop at 2:48 P.M. What is the probability that Mr. Jacob will arrive at the store by 3:00 P.M.?

The required probability is

After having gone through the stuff given above, we hope that the students would have understood, "Geometric Probability".