Describe the transformations that will map each frieze pattern onto itself. 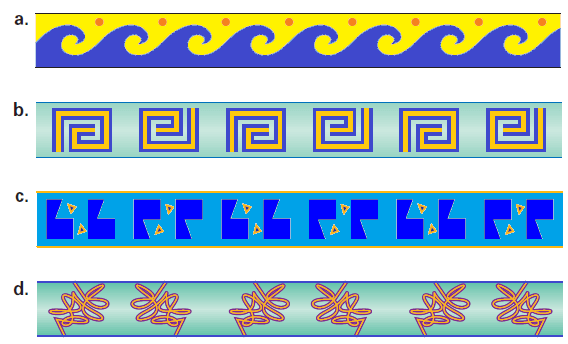 a. This frieze pattern can be mapped onto itself by a horizontal translation (T).

b. This frieze pattern can be mapped onto itself by a horizontal translation (T) or by a 180° rotation (R).

d. This frieze pattern can be mapped onto itself by a horizontal translation (T) or by a reflection in a vertical line (V).

To classify a frieze pattern into one of the seven categories, first decide whether the pattern has 180° rotation. If it does, then there are three possible classifications: TR, TRVG, and TRHVG.

If the frieze pattern does not have 180° rotation, then there are four possible classifications: T, TV, TG, and THG. Decide whether the pattern has a line of reflection. By a process of elimination, you will reach the correct classification

Categorize the snakeskin pattern of the mountain adder. 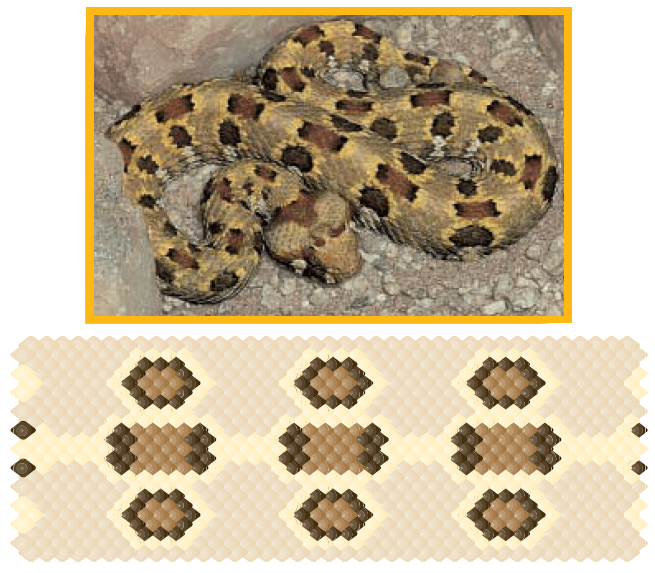 The frieze patterns of ancient Doric buildings are located between the cornice and the architrave, as shown below. 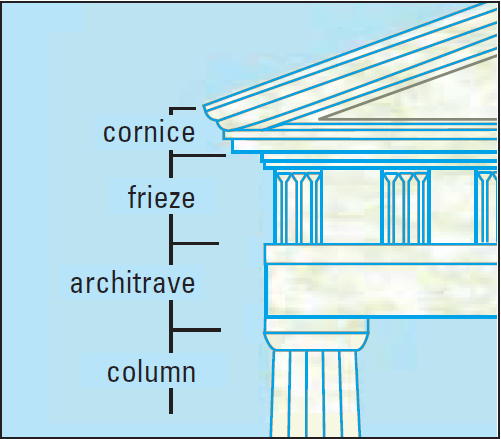 The frieze patterns consist of alternating sections. Some sections contain a person or a symmetric design. Other sections have simple patterns of three or four vertical lines.

Portions of two frieze patterns are shown below. Classify the patterns.

a. Following the diagrams on the previous page, you can see that this frieze pattern has rotational symmetry, line symmetry about a horizontal line and a vertical line, and that the pattern can be mapped onto itself by a glide reflection. So, the pattern can be classified as TRHVG.

b. The only transformation that maps this pattern onto itself is a translation. So, the pattern can be classified as T.

A border on a bathroom wall is created using the decorative tile at the right. The border pattern is classified as TR. Draw one such pattern.

Begin by rotating the given tile 180°. Use this tile and the original tile to create a pattern that has rotational symmetry. Then translate the pattern several times to create the frieze pattern.