About "Frequency distribution I"

A frequency distribution may be defined as a tabular
representation of statistical data, usually in an ascending order, relating to a measurable characteristic according to individual value or a group of values of the characteristic under study.

For the construction of a frequency-distribution of a variable, we need to go through the following steps.

Find the largest and smallest observations and obtain the difference between them, known as Range, in case of a continuous variable.

Present the class or class interval in a table known as frequency-distribution table.

Apply ‘tally mark’ i.e. a stroke against the occurrence of a particulars value in a class or class interval.

Count the tally marks and present these numbers in the next column, known as frequency column, and finally check whether the total of all these class frequencies tally with the total number of observations.

Following are the records of babies born in an hospital in San francisco during a week (B denoting Boy and G for Girl) :

Construct a frequency-distribution according to gender.

In order to construct a frequency-distribution of babies in accordance with their gender, we count the number of male births and that of female births and present this information in the following table.

A review of the first 30 pages of a statistics book reveals the following printing mistakes :

Make a frequency-distribution of printing mistakes. 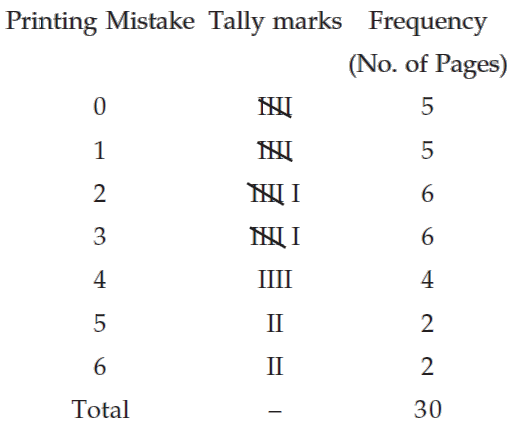 Following are the weights in kgs. of 36 students of an university.

Construct a frequency-distribution of weights, taking class length as 5.

(We always take the next integer as the number of class intervals so as to include both the minimum and maximum values).

Frequency-distribution of weights of 36 Students 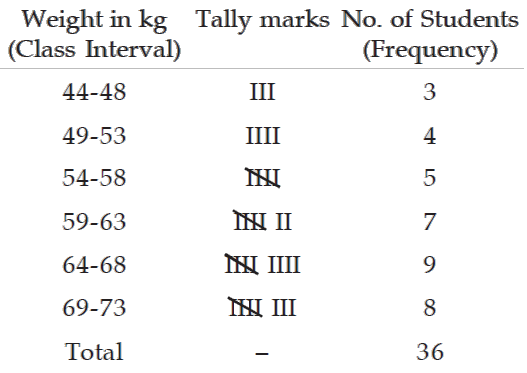 In case, the characteristic under consideration is an attribute, say nationality, then the tabulation is made by allotting numerical figures to the different classes the attribute may belong like, in this illustration, counting the number of American, Indian, British, French, German and so on.

The qualitative characteristic is divided into a number of categories or classes which are mutually exclusive and exhaustive and the figures against all these classes are recorded.

Thus, the number of Americans, as found from the given data, signifies the frequency of the Americans. So frequency distribution is a statistical table that distributes the total frequency to a number of classes.

When tabulation is done in respect of a discrete random variable, it is known as Discrete or Un grouped or simple Frequency Distribution and in case the characteristic under consideration is a continuous variable, such a classification is termed as Grouped Frequency- distribution.

In case of a grouped frequency-distribution, tabulation is done not against a single value as in the case of an attribute or a discrete random variable but against a group of values.

After having gone through the stuff given above, we hope that the students would have understood "Frequency distribution I".

Apart from the stuff given above, if you want to know more about "Frequency-distribution", please click here