FINDING THE DISTANCE BETWEEN TWO POINTS

The Pythagorean Theorem can be used to find the distance between any two points (x1, y1) and (x2, y2) in the coordinate plane. The resulting expression is called the Distance Formula.

Using the Pythagorean Theorem to derive the Distance Formula

To find the distance between points P(x1, y1) and Q(x2, y2), draw segment PQ and label its length d. Then draw horizontal segment PR and vertical segment QR . Label the lengths of these segments a and b. 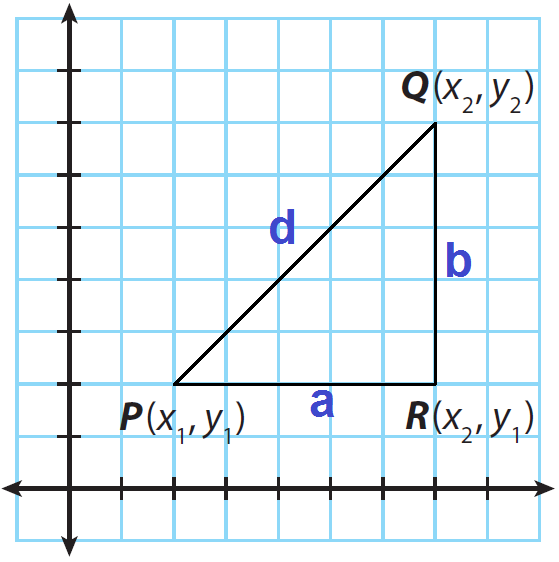 PQR is a right triangle with hypotenuse PQ  =  d.

Since PR is a horizontal segment, its length, a, is the difference between its x-coordinates. Therefore,

Since QR is a horizontal segment, its length, b, is the difference between its y-coordinates. Therefore,

Use the Pythagorean Theorem to find d, the length of segment PQ. Substitute the expressions from step 2 and step 3 for a and b.

Why are the coordinates of point R the ordered pair (x₂, y₁) ?