FINDING THE AREA OF A RHOMBUS

The area of a rhombus is half of the product of the lengths of its diagonals. 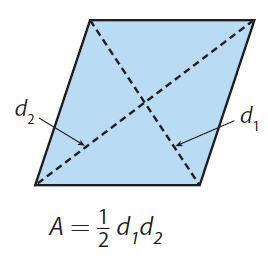 Relationship between Rhombus and Rectangle

A rhombus is a quadrilateral in which all sides are congruent and opposite sides are parallel. A rhombus can be divided into four right triangles that can then be rearranged into a rectangle.

Cedric is constructing a kite in the shape of a rhombus.The spars of the kite measure 15 inches and 24 inches. How much fabric will Cedric need for the kite ? 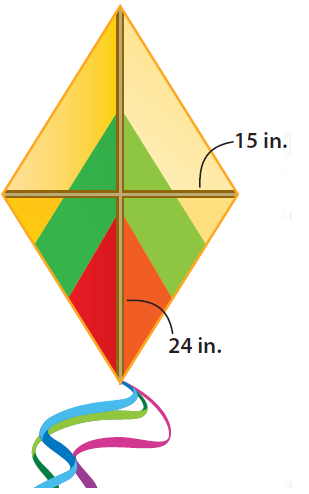 To determine the amount of fabric needed, find the area of the kite.

So, Cedric needs 180 square inches of fabric to make the kite.

A kite in the shape of a rhombus has diagonals that are 25 inches long and 15 inches long. What is the area of the kite?