A circle is a set of points in a plane that are a fixed distance from the center.

The circumference of a circle is the distance around the circle.

The above explained points have been illustrated in the diagram given below. 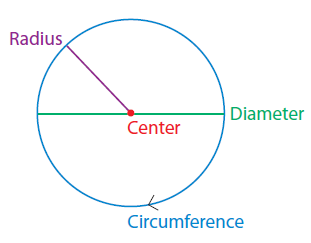 The ratio of the circumference to the diameter is the same for all circles.

This ratio is called π or pi, and you can approximate it as 3.14 or as . You can use π to find a formula for circumference.

For any circle, C/d = π. Solve the equation for C to give an equation for the circumference of a circle in terms of the diameter.

The ratio of the circumference to the diameter is π.

Multiply both sides by d.

The diameter of a circle is twice the radius. You can use the equation C = πd to find a formula for the circumference C in terms of the radius r.

The two equivalent formulas for circumference are C = πd and C = 2πr.

An irrigation sprinkler waters a circular region with a radius of 14 feet. Find the circumference of the region watered by the sprinkler.  Use 22/7 for π.

So, the circumference of the region watered by the sprinkler is about 88 feet.