The internal bisector of an angle of a triangle divides the opposite side internally in the ratio of the corresponding sides containing the angle. 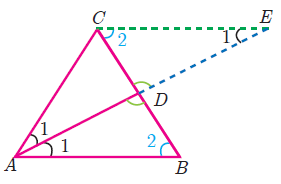 In ΔABC, AD is the internal bisector

If a straight line through one vertex of a triangle divides the opposite side internally in the ratio of the other two sides, then the line bisects the angle internally at the vertex. 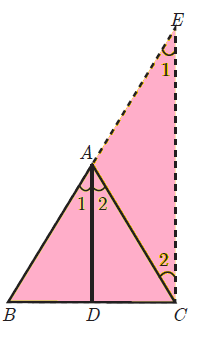 ABC is a triangle. AD divides BC in the ratio of the sides containing the angles <A to meet BC at D.

Hence AD is not the bisector of <A.

Hence AD is the bisector of <A.

ABCD is a quadrilateral in which AB=AD, the bisector of  <BAC and <CAD intersect the sides BC and CD at the points E and F respectively. Prove that EF  BD .

In triangle ABC, AE is the bisector of <BAC

In triangle ACD, AF is the bisector <CAD

Hence EF is parallel to BD.