EQUATION OF THE LINE DIFFICULT PROBLEMS WITH ANSWERS

Equation of the Line Difficult Problems with Answers :

Here we are going to see some how we find the equation of the line with difficult problems.

Equation of the Line Difficult Problems with Answers - Questions

Find the equation of the line passing through (22, -6) and having intercept on x-axis exceeds the intercept on y-axis by 5.

The straight line is passing through the point (22, -6)

If A (3, 6) and C (-1, 2) are two vertices of a rhombus ABCD, then find the equation of straight line that lies along the diagonal BD. 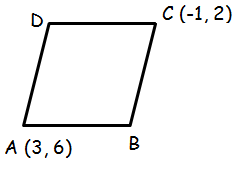 In any rhombus diagonals bisect each other at right angle.

In any rhombus midpoint of the diagonals will be equal.

First we need to find the point P.

After having gone through the stuff given above, we hope that the students would have understood "Equation of the Line Difficult Problems with Answers".