EQUATION OF LINE WITH A POINT AND INTERCEPTS

Find the equation of the line passing through the point (9, -1) and having its x-intercept thrice and its y-intercept.

Let a and b are x and y-intercepts respectively.

The required line is passing through the point (9 , -1)

A straight line cuts coordinate axes at A and B. If the midpoint of AB is (3, 2), then find the equation of AB. 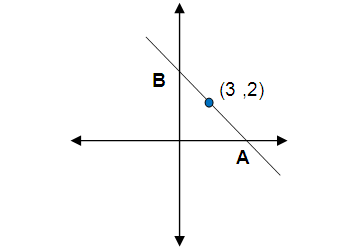 By equating x and y coordinates, we get

Find the equation of the line passing through (22,-6) and having intercept on x-axis exceeds the intercept on y-axis by 5.

The required equations are