DOMAIN AND RANGE OF RATIONAL FUNCTIONS WITH HOLES

Domain of a Rational Function with Hole

Domain of the above function is all real values of 'x' for which 'y' is defined.

If there is any value of 'x' for which 'y' is undefined, we have to exclude that particular value from the set of domain.

In the above rational function, let us equate the denominator 'x - 2' to zero.

In the rational function

if x = 2, then the denominator becomes zero and the value of 'y' becomes undefined.

Therefore, the domain is

Finding Hole of a Rational function

For the rational function

let us try to find hole, if any.

To find hole, simplify the rational function as shown below.

In the above simplification, the common factor for numerator and denominator is (x - 2).

So there is a hole.

(Note : If there is no common factor for both numerator and denominator, then there is no hole)

After having crossed out the common factor (x - 2), the function is simplified to

After simplification, the given rational function becomes

which is linear and its graph will be a straight line. 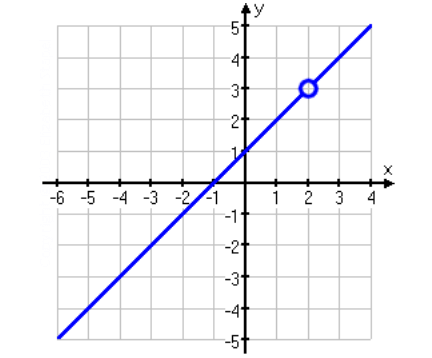 Range of a Rational Function with Hole

When we look at the above figure, the graph of

Because, there is a hole at

So, the range is all real values except '3'.