DOMAIN AND RANGE OF A FUNCTION

Domain of a Function

Domain is all real values of x for which y is defined.

If there is any value of x for which y is undefined, we have to exclude that particular value from the set of domain.

How to find domain of a function ?

To find the domain of a function, we have to find the values of x for which the given function is defined.

In the above function, if we substitute -3 for x, then we get

The denominator becomes zero and the function becomes undefined for x  =  -3.

So, the above function is defined for all real values of x except -3.

Therefore, the domain  is

Range of a Function

How to find range of a function ?

To find the range of a function, we have to find the values of y for the given domain (real values of x)

To find range of the function above, first we have to find inverse of y.

To find inverse of y, follow the steps given below.

The same function has to be redefined by x in terms of y.

Add 2y to each side.

Divide each side by y.

Now the function has been defined by x in terms of y.

In the inverse function y-1, if we substitute 0 for x, the denominator will become zero.

Hence, y-1 is defined for all real values of x except zero.

And we already know the fact that

Therefore, the range of y is

Finding Range of a Function from Graph

For some functions, it is bit difficult to find inverse function. In that case, we have to sketch the graph of the function and find range.

In this way, we can easily get the range of a function.

Let us see, how to find range of the function given below using it graph. .

The above function is a quadratic function.

Because x2 is positive, its graph will be an open upward parabola.

Find the vertex of the parabola.

Write the given quadratic function in vertex form. 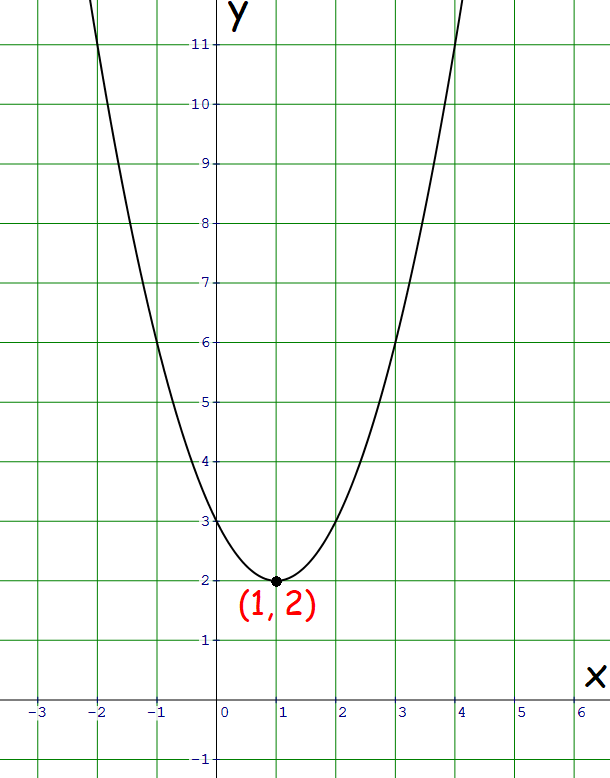 In the above graph, it is clear that the parabola appears for y ≥ 2.

Therefore, the range of the given function is