A dilation is a transformation that produces an image that is the same shape as the original, but is a different size.  NOT an isometry.  Forms similar figures.

In simple words, dilation means, it just re sizes the given figure without rotating or anything else.

If the given figure is dilated by the scale factor "k", then the dilation transformation matrix would be as given below.

Vertices of the translated image  are 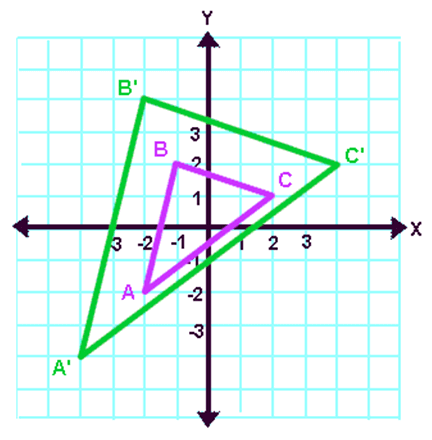 Once students understand the above mentioned rule which they have to apply for dilation transformation, they can easily make dilation-transformation of a figure.

Here, the rule we have applied is

Let us consider the following example to have better understanding of dilation.

First we have to write the vertices of the given triangle ABC  in matrix form as given below.

Here,  triangle is dilated by the scale factor "k = 2". So each element of the above matrix to be multiplied by 2.

When we do so, the matrix we get

From the matrix in step 2, we can get the vertices of the dilated triangle for the scale factor k  =  2.

Vertices of the dilated triangle are

How to sketch the dilated figure?

5. When we apply the formula, we will get the following vertices of the image (dilated figure).

7. When plot these points on the graph paper, we will get the figure of the image (dilated figure).