In Mathematics, we have different types of numbers. Initially, numbers can be broadly classified into two types. That is, real and imaginary numbers. 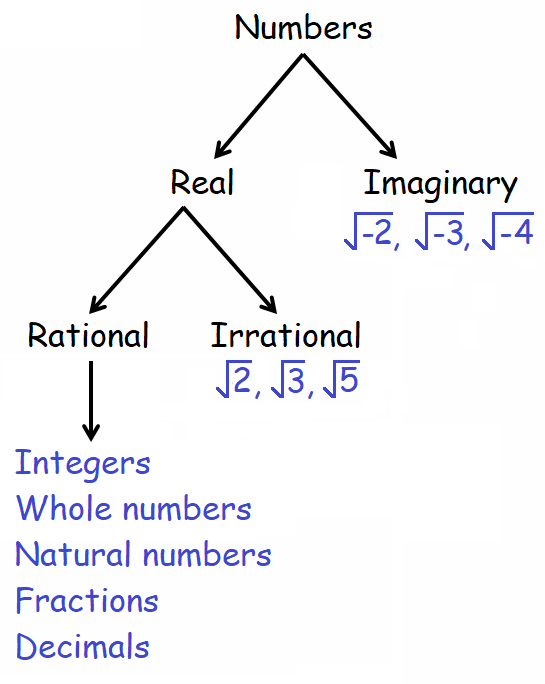 Fractions can further be classified as follows :

(numerator is less than the denominator)

(numerator is greater than the denominator)

Decimals can further be classified as follows.

Natural numbers or counting numbers are the most basic types of numbers you learned for the first time as toddlers. They start from 1 and go to infinity, i.e., 1, 2, 3, 4, 5, 6, and so on. They are also called positive integers. In the set form, they can be written as :

Natural numbers are represented by the symbol N.

Whole numbers are the set of natural numbers, including zero. This means they start from 0 and go up to 1, 2, 3, and so on, that is

Whole numbers are represented by the symbol W.

Integers are the set of all whole numbers and the negatives of natural numbers. They contain all the numbers which lie between negative infinity and positive infinity. They can be positive, zero, or negative but cannot be written in decimal or fraction. Integers can be written in set form as

A fraction represents parts of a whole piece. It can be written in the form p/q, where both p and q are whole numbers, and q can never be equal to 0 (q ≠ 0). All fractions are rational numbers, but not all rational numbers are fractions.

Percentage is the way of representing the numbers in terms of fraction of 100. We can split the word "PERCENT" as "PER + CENT". That means per hundred. Usually, in examination marks scored by the students is represented as percentage. That is, how many marks the student has scored out of 100.

In our number system we are representing the rational number in the form of fraction like a/b.

It is usually denoted as ℝ

Complex number is a combination of real and imaginary numbers. It is usually expressed in the form a + ib where a is the real number and b is the complex number.