DIFFERENCE BETWEEN VARIABLE AND CONSTANT

The picture shown below illustrates the difference between a variable and a constant. 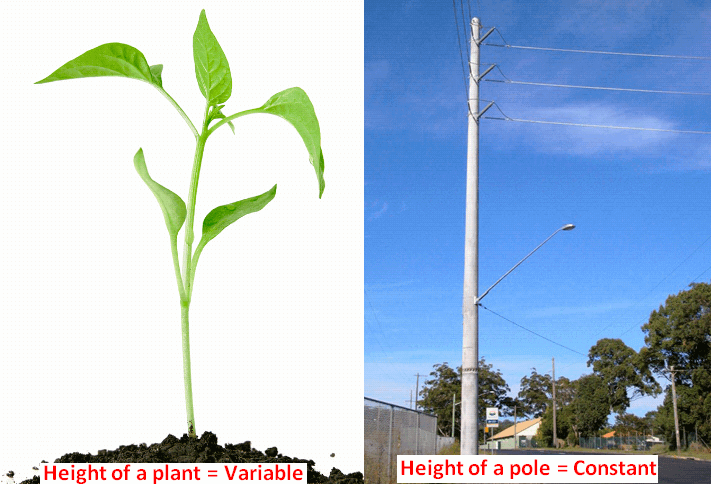 The symbol which has no fixed value is called as variable.

The symbol which has a fixed value is called as constant

What is the value of $100 currency when i have it in San Francisco?

What is the value of $100 currency when i have it in Chicago?

From the above questions and answers, one thing is very clear. That is,. in whichever part of America i go, the value of the currency $100 is same.  It is not changed in different parts of the country.

Let us consider a garment whose cost is  x dollars.

The manufacturer of the garment sells it to the wholesaler at the cost of $40.

The wholesaler sells it to the retailer at the cost of $44.

The retailer sells it to the customer at the cost of $50.

Here, the garment is same.

But, when it is in manufacturer, wholesaler and retailer, its cost is different.

Hence, the cost of the garment x is variable.

Some English alphabets will have fixed values, but the values will be unknown.

Then, k will have only one fixed value and it is unknown.

Let us look at some problems on simple equations to have better understanding on variables.

Subtract 3 from each side.

Subtract 6 from each side.

Divide each side by 3.

In all the above problems, we have got value for the same alphabet x.

Even though we have the same alphabet x, we don't get the same value for x.

We get different value for x. So the value of x is being changed.

Therefore, x is considered to be variable.