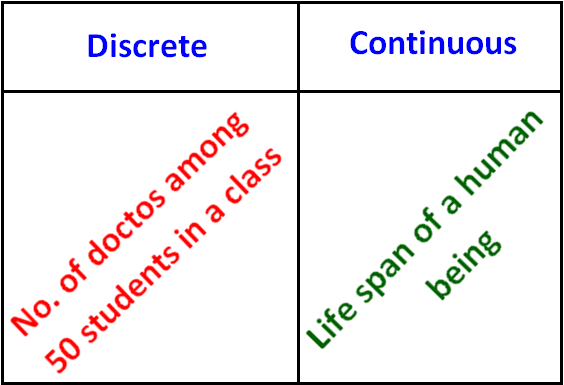 If "X" be the random variable and it stands for no. of heads, what possible values can "X" take?

If we get head one of the ten tosses and tails in the remaining 9 tosses, then X  =  1.

If we get heads two of the ten tosses and tails in the remaining 8 tosses, then X  =  2.

Because "x" takes only a finite or countable values, 'x' is called as discrete random variable.

If "X" be a random variable and it stands for life time of a human being, what possible values can "X" take ?

As we have written above, can we say all the possible values for "X" in the interval [0 yrs, 100 yrs]

Everyone's answer will be "NO"

Because "X" takes all possible values in the interval [0 yrs, 100 yrs],  "X" is called as continuous random variable.

3. No. of doctors among the students who are in final years of the school

1.  The life length in hours of a certain bulb.

2. "ph" value of a chemical compound which is randomly selected.

3.  Wages of workers in factory

4. Height of students in a university