In this section, you will learn, how to solve word problems on customary units. 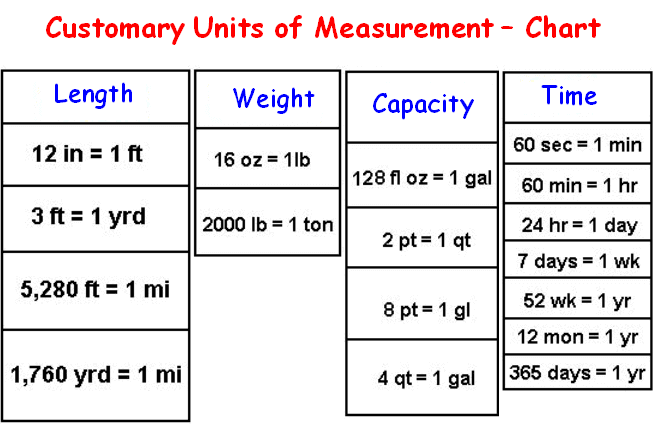 David travels 60 miles in two hours. How many yards of distance will he cover in one minute ?

Given : Distance covered in 2 hours is 60 miles.

So, David will cover 880 yards of distance in 1 minute.

Mark jogged 15840 feet in 45 minutes. Find the speed of Mark in feet per minute.

Use a fraction to find the length in feet of a shoe that is 9 inches long.

So we have to divide.

Given : Height of the television is 24 inches.

Height of the stand is

Distance from the floor to the top of the television is

So, the top of the television is 60 inches far from the floor.

Both Becky and Keith took the same amount of time. That is 20 minutes.

Distance covered by Becky and Keith are given in different units. (Miles and Feet)

We have to make the units to be same.

Let us convert miles in to feet.

David prepares 24 pounds of metal in 1 hour 36 minutes. At the same rate, How many ounces of metal will he prepare in one minute ?

So, David prepares 4 ounces of metal in 1 minute.

Mark used 15840 ounces of metal to make an alloy in 45 minutes. Find the amount of metal used in one minute (in ounces).

Amount of almonds handed out to 1 student is 4 ounces.

Total no. of ounces of almonds handed out for 22 students is

So, Mrs. Moore handed out 5.5 pounds of almonds.

Tommy uses 4 ounces of cheese in each pizza he makes. How many pounds of cheese does Tommy need to make 28 pizzas ?

Who is driving faster,

To compare the given measures, convert them in to unit rates in distance per hour.

From the above unit rates, Lenin covers more miles than Daniel per hour.

So, Lenin is driving faster.