It is a three dimensional solid having six rectangular faces. 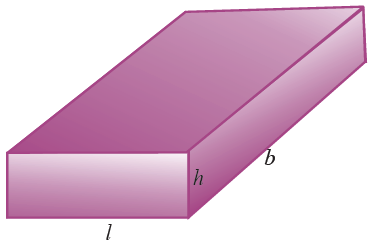 Surface area of a cuboid

Let l, b and h be the length, breadth and height of a cuboid respectively. To find the

total surface area, we split the faces into three pairs.

(i) The total area of the front and back faces is

(ii) The total area of the side faces is

(iii) The total area of the top and bottom faces is

If the length, breadth and height of a cuboid are l, b and h respectively, then the volume V of the cuboid is given by the formula

Example problems of surface area and volume of cuboid

Find the total surface area of a cuboid whose length, breadth and height are 20 cm, 12 cm and 9 cm  respectively.

Two cubes each of volume 216 cm3 are joined to form a cuboid as shown in the figure.

Find the T.S.A of the resulting cuboid. 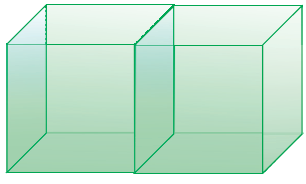 Now the two cubes of side 6 cm are joined to form a cuboid.

After having gone through the stuff given above, we hope that the students would have understood "Cuboid".

Apart from the stuff given above, if you want to know more about "Cuboid".