A cube is a solid having six square faces. Example: Die. 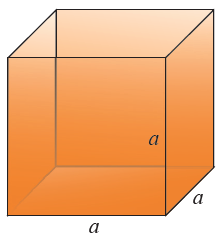 Surface area of a cube

The sum of the areas of all the six equal faces is called the Total Surface Area (T.S.A) of the cube.

In the figure given above, let the side of the cube measure a units. Then the area of each face of the cube is a2 square units.

Hence, the total surface area is 6a2 square units.

In a cube, if we don’t consider the top and bottom faces, the remaining area is called the Lateral Surface Area (L.S.A). Hence, the lateral surface area of the cube is 4a2 square units.

Let the side of a cube be a units. Then :

If the side of a cube is a units, then its volume V is given by the formula

Find the length of the side of a cube whose total surface area is 216 square cm.

Let a be the side of the cube.

If the lateral surface area of a cube is 900 cm2, find the length of its side.

After having gone through the stuff given above, we hope that the students would have understood "Cube shape".

Apart from the stuff given above, if you want to know more about "Cube shape".