Here we are going to see an example problem on the topic coordinate geometry.

The relationship between selling price and demand is linear.

Assuming selling price per litre along the x-axis and demand along the y-axis,

Hence, the linear relationship between selling price per litre and demand is the equation of the line passing through the points ( 14, 980 ) and (16, 1220 )

Thus, the owner of the milk store could sell 1340 litres of milk weekly at Rs 17/litre. 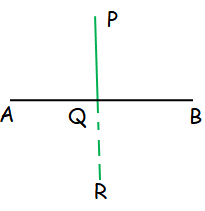 Let P(3,8) be the given point for which image to be found.

comparing the co-ordinates, we get

After having gone through the stuff given above, we hope that the students would have understood, "Coordinate Geometry Questions for Grade 10".

Apart from the stuff given in this section "Coordinate Geometry Questions for Grade 10", if you need any other stuff in math, please use our google custom search here.