In this section, you will learn solving word problems by converting the given rate to unit rate.

First let us understand what is unit rate.

The ratio between the given value and 1

Comparing the given amount or value to 1 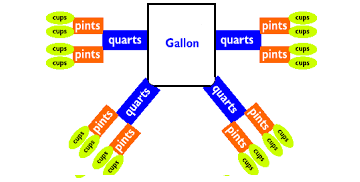 From the above picture, we can get the following unit rates related liquid measurements.

If David can prepare 2 gallons of juice in 4 days, how many  cups of juice can he prepare per day ?

No of gallons of juice prepared in 4 days  =  2 gallons

Therefore, David can prepare 32 cups of juice in 4 days.

So, David can prepare 8 cups of juice in 1 day.

If John can cover 360 miles in 3 hours, find the number of miles covered by John in 1 minute.

A person can cover a distance of 84 miles in 4 gallons of fuel. If he has 2.5 gallons, how many miles can he cover ?

Therefore, no. of miles traveled in 2.5 gallons  is

If a person drinks 8 cups of apple juice per month, how many gallons will he drink in one year?

Given : 8 cups in one month

So, he will drink 6 gallons of apple juice in 1 year.