A two dimensional graphical representation of a continuous frequency distribution is called a histogram.

In histogram, the bars are placed continuously side by side with no gap between adjacent bars.

That is, in histogram rectangles are erected on the class intervals of the distribution. The areas of rectangle are proportional to the frequencies.

We can follow the steps given below to understand how to construct a histogram.

Mark the class intervals along the X-axis on a uniform scale.

Mark the frequencies along the Y-axis on a uniform scale.

Construct rectangles with class intervals as bases and corresponding frequencies as heights.

Draw a histogram for the following table which represent the marks obtained by 100 students in an examination:

The class intervals are all equal with length of 10 marks.

Let us denote these class intervals along the X-axis.

Denote the number of students along the Y-axis, with appropriate scale.

The histogram is given below. 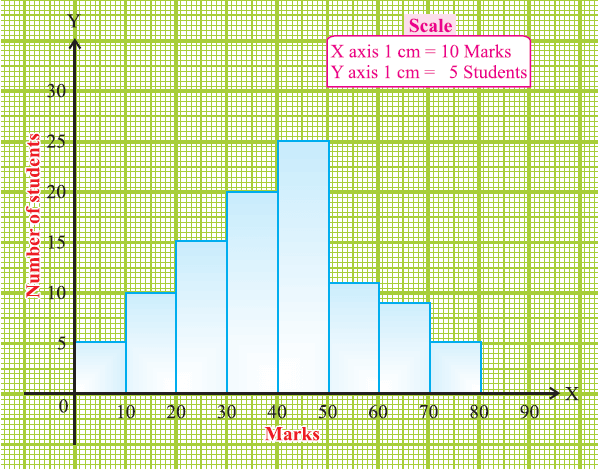 The heights of trees in a forest are given as follows. Draw a histogram to represent the data.

In this problem, the given class intervals are discontinuous (inclusive) form.

If we draw a histogram as it is, we will get gaps between the class intervals.

But in a histogram the bars should be continuously placed without any gap.

Therefore we should make the class intervals continuous. For this we need an adjustment factor.

In the above class interval, we subtract 0.5 from each lower limit and add 0.5 in each upper limit. Therefore we rewrite the given table into the following table.

The histogram is given below 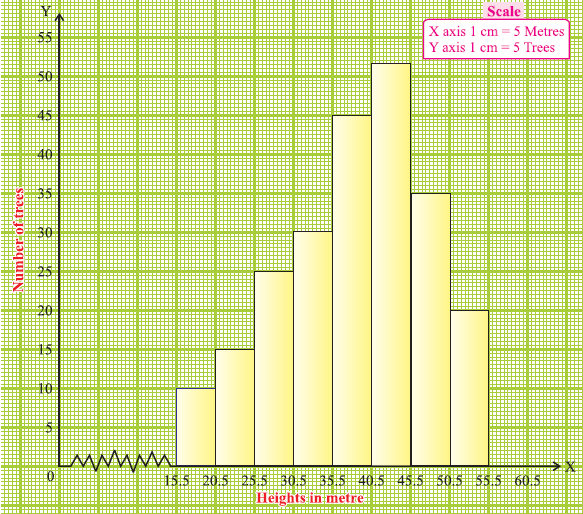