To prove that the equations of a conic is of degree 2 in x and y.

Let the focus be S(x₁,y₁) and the directrix be the line ax+by+c=0.

Let the eccentricity is e and P (x,y) be any point on it. 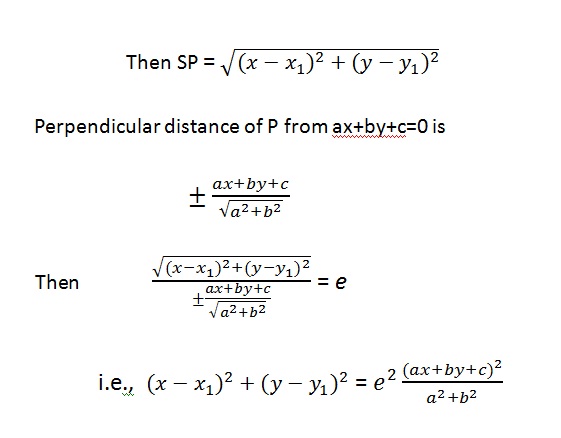 Simplifying we get an equation of the form

Therefore the equation is of second degree in x and y.

Now let us see how to find the type of the curve from the given equation of second degree. In the general equation Ax²+By²+Cx+Dy+F=0, with two variables x and y, then

The new terms we learned here in this topic is

f -  focus  -the fixed point from which the distance is measured.

We will discuss about the parabola, ellipse and hyperbola in the following pages.

Teachers and parents can guide the student to go through the pages and get the good knowledge of parabola, ellipse and hyperbola. If you have any doubt, please contact us through mail, we will help you to clear your doubt.