We might have already learned about the stuff simple interest in solving interest and investment problems. We know that if the principal remains the same for the entire period or time then interest is called as simple interest.

We can define the compound interest as the interest accrues when earning for each specified period of time added to the principal thus increasing the principal base on which subsequent interest is computed.

The picture given below clearly explains the difference between compound and simple interest. 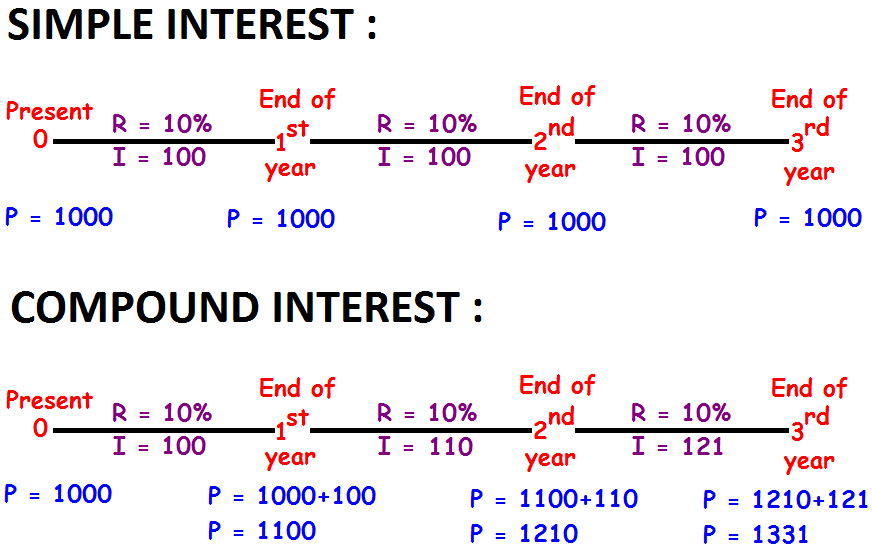 When we look at the above picture, it is clear that interest earned in S.I and C.I is same ($100) for the 1st year when interest is compounded annually in C.I.

The formula given below can be used to find accumulated value in C.I.

To find the value of "i", first convert the rate of interest in to decimal form. Then divide the decimal value by the number of conversion periods per year.

$800 is invested in C.I where the rate of interest is 20% per year. If interest is compounded semi annually, what will be the accumulated value and C.I after 2 years ?

The formula to find accumulated value in C.I is

Then, the accumulated value is

A sum of money placed at compound interest doubles itself in 3 years. In how many years will it amount to four times itself ?

From the given information, P becomes 2P in 3 years.

Since the investment is in C.I, the principal in the 4th year will be 2P

And 2P becomes 4P (it doubles itself) in the next 3 years.

Therefore, at the end of 6 years accumulated value will be 4P.

Hence, the amount deposited will amount to 4 times itself in 6 years.

(Since it is compounded annually, S.I and C.I for 1st year would be same)

When we compare the C.I for 1st year and 2nd year, it is clear that the interest earned in 2nd year is 30 more than the first year.

It can be considered as simple interest for one year.

In the given problem, simple interest earned in two years is 1200.