Theoretical probability is the probability that an event occurs when all of the outcomes of the experiment are equally likely.

The formula given below can be used to find theoretical probability.

Probability can be written as a fraction, a decimal, or a percent.

A bag contains 6 red marbles and 12 blue ones. You select one marble at random from the bag. What is the probability that you select a red marble ? Write your answer in simplest form.

Find the total number of equally likely outcomes by adding number of red marbles and number of blue marbles.

There are 18 possible outcomes in the sample space.

Find the probability of selecting a red marble.

At a school fair, we have a choice of spinning Spinner A or Spinner B. We win an MP3 player if the spinner lands on a section with a star in it. Which spinner should we choose if we want a better chance of winning ? 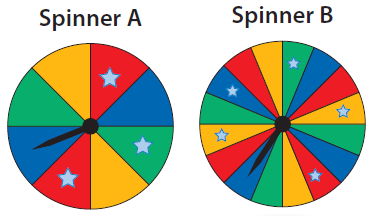 Let us find probabilities of getting a star in both spinner A and spinner B.

Compare the probabilities and choose which spinner has better chance of winning.

Number of sections with stars  =  3

The formula given below can be used to find probability.

Number of sections with stars  =  5

The probability of getting a star in Spinner A is greater than  Spinner B.  So, we should choose for a better chance of winning

The theoretical probability of an event is a ratio comparing the number of ways the event can occur to the total number of outcomes for the experiment.