When data are collected on two variables simultaneously, they are known as bivariate data and the corresponding frequency distribution, derived from it, is known as Bivariate Frequency Distribution.

If x and y denote marks in statistics and math for a group of 30 students, then the corresponding bivariate data would be (x, y).

As in the case of a Univariate Distribution, we need to construct the frequency distribution for bivariate data. Such a distribution takes into account the classification in respect of both the variables simultaneously.

Prepare a Bivariate Frequency table for the following data relating to the marks in Statistics (x) and Mathematics (y) :

Take mutually exclusive classification for both the variables, the first class interval being 0-4 for both.

From the given data, we find that

We carry on giving tally marks till the list is exhausted.

Bivariate Frequency Distribution of Marks in Statistics and Mathematics.

We note, from the above table, that some of the cell frequencies are zero. Starting from the above Bivariate Frequency Distribution, we can obtain two types of univariate distributions which are known as:

The following table shows the marginal distribution of marks of Statistics. 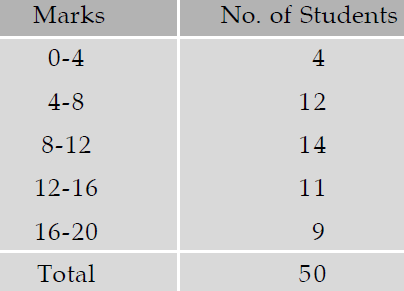 We can find the mean and standard deviation of marks in Statistics from the above table. They would be known as marginal mean and marginal SD of Statistics marks.

Similarly, we can obtain the marginal mean and marginal SD of Mathematics marks. Any other statistical measure in respect of x or y can be computed in a similar manner. 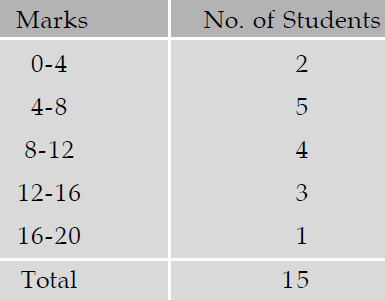 We may obtain the mean and SD from the above table. They would be known as conditional mean and conditional SD of marks of Statistics. The same result holds for marks in Mathematics.

After having gone through the stuff given above, we hope that the students would have understood "Bivariate data".

Apart from the stuff given above, if you want to know more about "Bivariate data", please click here.