About "Area of a rhombus"

Here we are going to see the formula to be used to find area of rhombus and some example problems.

A quadrilateral which is having four equal sides is called rhombus. In other words a parallelogram will become rhombus if the diagonals are perpendicular. 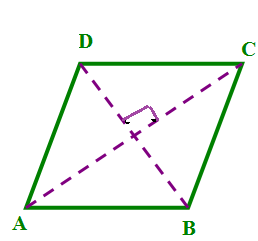 Difference between square and rhombus:

Find the area of rhombus if the diagonal is measuring 15 cm and 10 cm.

To find the area of the rhombus first we have to find the length of the diagonals.

After having gone through the stuff given above, we hope that the students would have understood "Area of a rhombus"

Apart from the stuff given above, if you want to know more about "Area of a rhombus", please click here.