AREA OF A QUADRILATERAL

About "Area of a quadrilateral"

Area of a quadrilateral :

The word quadrilateral can be separated as Quad + lateral. Here quad means four and lateral means sides. A shape which is having four sides is generally called quadrilateral. The shapes parallelogram, rectangle, square, rhombus and trapeziums are one of the type of quadrilateral. 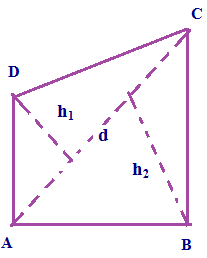 After having gone through the stuff given above, we hope that the students would have understood "Area of quadrilateral"

Apart from the stuff given above, if you want to know more about "Area of a quadrilateral", please click here.