APPLYING ADDITION AND SUBTRACTION OF INTEGERS

You can use what you know about adding and subtracting integers to solve a multistep problem.

A seal is swimming in the ocean 5 feet below sea level. It dives down 12 feet to catch some fish. Then, the seal swims 8 feet up towards the surface with its catch. What is the seal’s final elevation relative to sea level ? 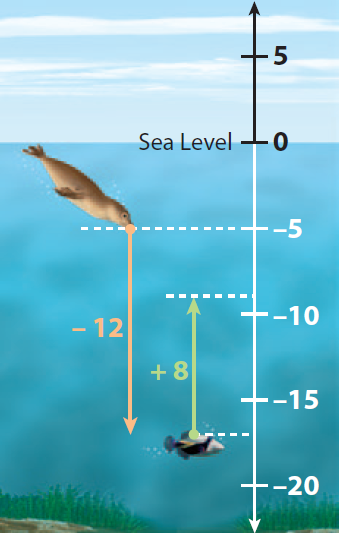 The seal starts at 5 feet below the surface, so its initial position is -5 ft.

Starts  - Dives down + Swims up

The seal’s final elevation is 9 feet below sea level.

You can use properties of addition to solve problems involving integers.

Jack has a checking account. On Monday he writes a $160 check for groceries. Then he deposits $125. Finally he writes another check for $40. What was the total change in the amount in Jack’s account ?

When Jack deposits money, he adds that amount to the account. When he writes a check, that money is deducted from the account.

Use a positive integer for the amount Jack added to the account. Use negative integers for the checks he wrote. Find the sum.

Add the amounts to find the total change in the account. Use properties of addition to simplify calculations.

Jack's account has $75 less than it did before Monday. This is reasonable because he wrote checks for $200 but only deposited $125.

Anna starts at 40 feet below cave entrance, so her initial position is -40 ft.

Anna's new position is 35 feet below the cave entrance.

Tomas works as an underwater photographer. He starts at a position that is 15 feet below sea level. He rises 9 feet, then descends 12 feet to take a photo of a coral reef. Write and evaluate an expression to find his position relative to sea level when he took the photo.

Tomas starts at 15 feet below sea level, so his initial position is -15 ft.

When Tomas takes photo, his position is 18 feet below the sea level.