Percents can be used in solving many types of problems and situations.

In this section, we are going to cover the two most common applications of percent.

Sales tax, which is the tax on the sale of an item or service, is a percent of the purchase price that is collected by the seller.

Marcus buys a varsity jacket from a clothing store in Anaheim. The price of the jacket is $80 and the sales tax is 8%. What is the total cost of the jacket ?

Use a bar model to find the amount of the tax. 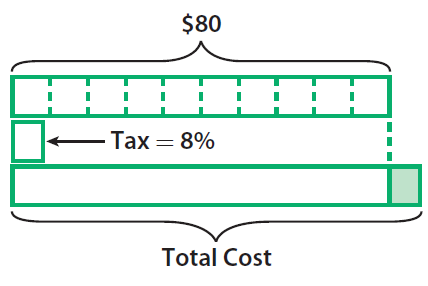 When we deposit money in a savings account, our money usually earns interest. When we borrow money, we must pay back the original amount of the loan plus interest. .

Simple interest is a fixed percent of the principal. The principal is the original amount of money deposited or borrowed.

Terry deposits $200 into a bank account that earns 3% simple interest per year. What is thetotal amount in the account after 2 years ?

Add the interest for 2 years to the initial deposit to find the total amount in his account after 2 years.