To find the cloud ceiling, one night an observer directed a spotlight vertically at the clouds. Using a theodolite placed 100 m from the spotlight and 1.5 m above the ground, he found the angle of elevation to be 60°. How high was the cloud ceiling? (Hint : See
figure) 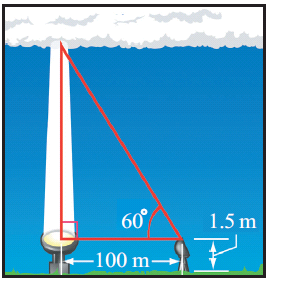 cloud is present. The cloud ceiling at airports  must be sufficiently high for safe take offs and landings. At night the cloud ceiling can be determined by illuminating the base of the clouds by a spotlight pointing vertically upward.)

In the given problem,we have to find the length of opposite side.

tan θ = opposite side/adjacent side

A simple pendulum of length 40 cm subtends 60° at the vertex in one full oscillation. What will be the shortest distance between the initial position and the final position of the bob? (between the extreme ends) 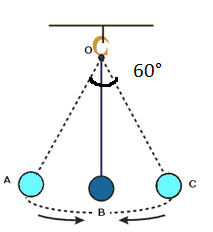 sin θ = opposite side/hypotenuse side

Two crows A and B are sitting at a height of 15 m and 10 m in two different trees vertically opposite to each other. They view a bread (an eatable) on the ground at an angle of depression 45° and 60° respectively. They start at the same time and fly at the same speed along the shortest path to pick up the bread. Which bird will succeed in it? 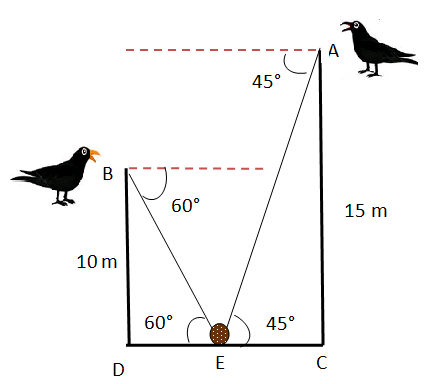 In the given problem,we have to the length of AE and BE.

sin θ  =  Opposite side/Hypotenuse side

sin θ = Opposite side/Hypotenuse side

The distance of BD is shorter than AE. So, bird "B" is having chance to succeed.