ANGLE OF ELEVATION AND DEPRESSION EXAMPLES

Angle of Elevation and Depression Examples :

Here we are going to see some example problems involving angle of elevation and depression.

Angle of Elevation and Depression Examples 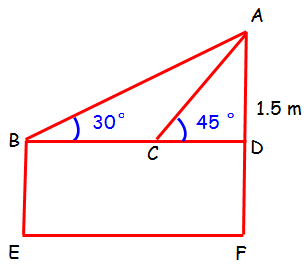 Distance moved by the student  =  BC

Hence the distance moved by the student is 1.098 m. 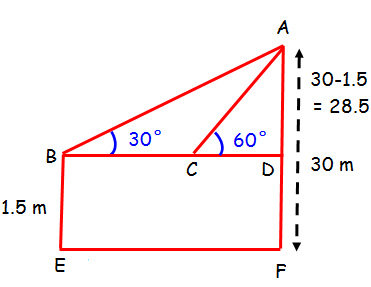 Multiplying by √3 on both numerator and denominator, we get

the distance he walked towards the building =  BD - CD

From the top of a lighthouse of height 200 feet, the lighthouse keeper observes a Yacht and a Barge along the same line of sight .The angles of depression for the Yacht and the Barge are 45° and 30°  respectively. For safety purposes the two sea vessels should be at least 300 feet apart. If they are less than 300 feet , the keeper has to sound the alarm. Does the keeper have to sound the alarm ? 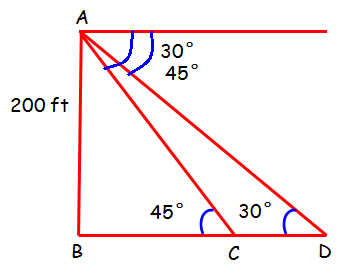 From the above picture, we have to find the value of CD.

sin θ = opposite side/Hypotenuse side

From this, we come to know that the distance between  Yacht and a Barge is less than 300 m. Hence the keeper has to sound the alarm.

After having gone through the stuff given above, we hope that the students would have understood the concept of angle of elevation and depression.