Addition concepts have been developed through hands-on experiences with countable objects or place value blocks. Addition is  "putting together" of two group of objects and finding how many in all. This will be very useful to kids who are in lower grade 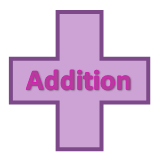 If a boy goes to shop and buys two types of articles,say Article A and Article B.In Article A he bought 20 and in Article B he bought 30. To find the total number of articles that he bought we have to add them.

Why do we have to practice these worksheets ?

Apart from the stuff given above, if you need any other stuff in math, please use our google custom search here