Here we are going to see some practice questions questions for SHSAT exams. Each question paper consists of 20 question. For each questions, you can find solution with detailed explanation.

No value of x.

In the formula V = s2h, if s is doubled and h is tripled, then V is multiplied by

Hence V is multiplied by 12.

By choosing 8 large box, we may place 8 soccer balls each. So, in large box we will have 64 balls.

Now we may place these 35 balls in 7 small boxes containing 5 balls each.

Hence the total number of boxes is 15. 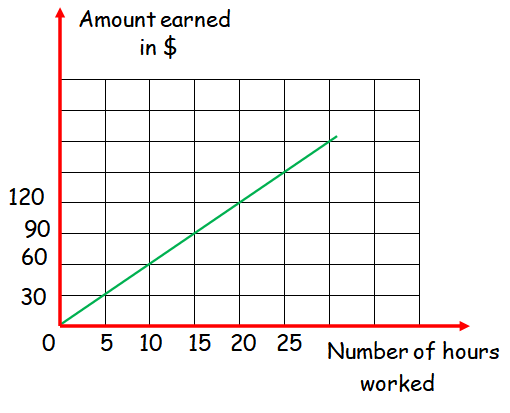 The straight line graph shows the relationship between number of hours worked and amount earned.  How much would be earned for 50 hours of work?

Let "x" be the number of hours worked

"y" be the amount earned.

The equation y = 6x represents the above relation.

The perimeter of a triangle, all of whose sides have integer length, is 19.  A possible length for the largest side is

The sum of three lengths is given as 19. If the longest side is 10, the sum of the other two sides would be 9, which is impossible.

After having gone through the stuff given above, we hope that the students would have understood, "SHSAT Practice Math Test".

Apart from the stuff given in this section "SHSAT Practice Math Test", if you need any other stuff in math, please use our google custom search here.