The distinct prime factors of 232 are

Hence the distinct prime factors are 2 and 29.

If the pattern continues, what will be the 438th symbol ?

By grouping the symbols, every group consists of 6 different symbols.

Since 438 is divisible by 6, the symbol at the 6th place is the answer.

Note : The set of symbols ends up with 438th position.

Find the value of t.

Multiply by 32 on both sides, we get

What is the largest integer greater than 52/3 ?

Since the bases are equal, the power are also equal.

What is the maximum number of points that two distinct circles intersect at ?. 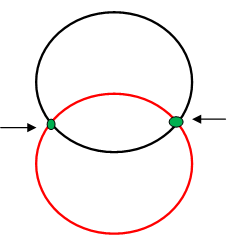 The sequence formed by the cumulative product

How many integers are in the set of non positive, non negative  integers?

The only non negative and non positive integer is 0. Hence the answer is 1.

How many chords are in the circle below ? 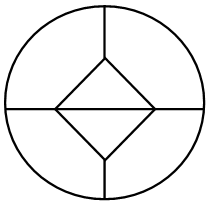 The chord must touch the circle at two points. The only segment that does this is the diameter.

Hence there is only one chord, that is diameter.