Let a, b, c and d are four distinct numbers in descending order.

b and c must be greater than d 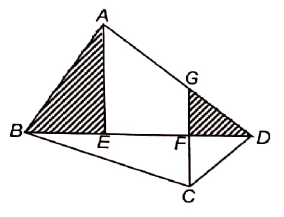 In triangles GFD and CFD, both are having equal bases and common altitude.

From the bottom layer, we can take the three cubes and arrange them below the left sided cube, so it becomes in the form of 4 - 1 - 1

So there are 10 possible ways.

In the figure given below, the difference of the areas of the square ABCD and square BEFG is 74 cm2. Find the area in cm2 of quadrilateral CDGF. 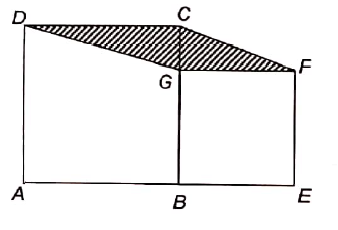 Inside the square ABCD, we draw a square BGKI. 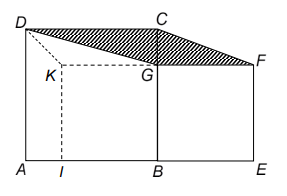 Inside the square ABCD , draw square BGKI which is of same area as square BEFG .

Hence, area of AIKGCD is 74 cm2 . Quadrilaterals KDAI and KDCG are of the same area, hence,

Since the triangles KDG and GCF are of same area, area of quadrilateral CDGF is 37 cm2.

Need to score the average of 95

The difference between old average and new average

If he is able to score full marks for the subsequent tests, 100 - 95 =  5 marks from each test will contribute to pull up the average score.

There are 10 red marbles, 5 blue marbles and 8 green marbles in a bag. If Janice has only one chance to take marbles out from the bag without looking into the bag, what is the minimum number of marbles she must take out from the bag to ensure she gets at least 2 marbles of the same color ?

But, it is not sure that the first two marbles taken out from the bag will be same of color.

So, we neglect this case.

If she takes the first marble of one color, second and third marbles of same color or second be one color, first and third of same color, then the minimum number of marbles taken out from the bag will be three.

But, this is also not sure. So, we neglect this case.

If she takes first, second and third marbles of different colors, then the fourth marble taken out will be in one of the colors of the first three marbles already taken.

Now, two of the marbles will be of same color. This is possible.

So, Janice must take minimum 4 marbles out from the bag to ensure that she gets at least 2 marbles of the same color.

Sharon answered 425 easy questions and 42 difficult questions correctly in the game show. What is her maximum winnings ?

He will get 53 silver coins.

30% of silver coins can be exchanged for gold coin.

15 coins can be going to be exchanged for gold coins. 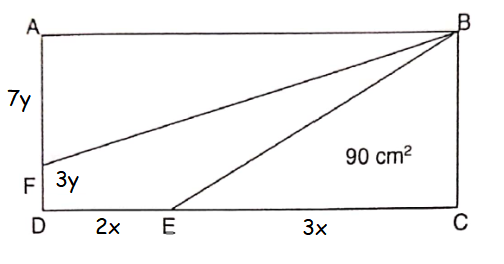