Let x be the required number

Subtract 4 on both sides

The question paper in an exam consists 80 problems. James has solved 68 of them. The percentage of the problems he has solved?

Total number of questions in the question paper  =  80

An author of a math competition was looking through a tentative exam, when he realized that he could not use one of his proposed problems. Frustrated, he had decided to take a nap instead, and slept from 10.47 am to 7.32 pm. For how many minutes did he has sleep ? 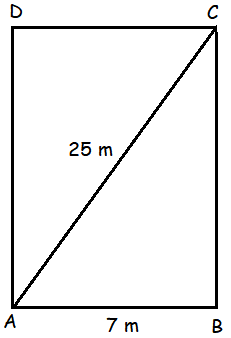 In a right triangle ABC,

If the diagonal of a square is 4 feet long, then the area of the square is

If two angles are supplementary and one of the angles is 9 times as large as the other, what is the measure of the larger angle?

Let "x" be the unknown angle

Divide both sides by 10

ABCD is a square with the length of 8 units each side. A second square A1B1C1D1 is formed by joining the midpoints of AB, BC, CD,and DA. Find the sum of the areas of these two squares 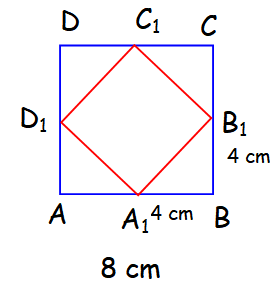 To find the area of square A1B1C1D1, we have to find the side length of A1B1

The number of three-digit perfect squares are,

So, the number of three digit perfect squares are 22.

A train is running at a speed of 20 m/sec.. If it crosses a pole in 30 seconds, find the length of the train in meters.

The distance covered by the train to cross the pole is

=  Length of the train

Given : Speed is 20 m/sec and time taken to cross the pole is 30 seconds